The case King v. Burwell, being argued before the Supreme Court on March 4th, challenges the authority of the Federal Government to issue health insurance premium subsidies on federally-facilitated marketplaces. The question is whether the tax subsidies available on exchanges 'established by the state' were intended to be available on the federal exchange as well.

The case is complex and its verdict could strike at the core of the ACA. The legal question is not constitutional but statutory. Did the IRS correctly interpret language of the ACA? Access to coverage for millions of Americans hangs in the balance.

Sitting as we do at the University of Pennsylvania, we can't help but approach complex matters such as these as any good student would. So here's our syllabus of required reading for King v. Burwell 101. Do Andy Goldsworthy’s beautiful ice and snow sculptures give you chills?

What I've Learned From My Side Job Critiquing Dick Pics
Thursday January 9th, 2014 at 2:40 PM

In September this year, I woke up to an excellent dick pic. I can remember it quite clearly: it was a low-lit shot of a firmly-erect penis straining sideways through boxers, and I was thrilled to receive it: it was subtle, it wasn’t unsolicited, and it was unusually sexy for a Snapchatted cock shot. It also changed the trajectory of my life. I don’t want to send anyone’s ego out of the stratosphere by saying that, but it’s not really an exaggeration: after I received that photo, invigorated and shot through with dopamine, I tweeted about how rare and encouraging it was to receive a decent dick pic. That sparked an online conversation about how to improve the dismal state of dick pics—I would classify them as generally dull, artless and unsolicited—and that lead to my rise as the Internet’s most beloved dick pic critic.

I started Critique My Dick Pic (Not! Safe! For! Work!, and that goes for all links throughout) that same day; a blog with a simple, self-explanatory premise: men (and other people with penises) send me pictures of their dicks, and I critique them with love. “With love” refers to my policy of being neutral about the size of someone’s dick and refusing to shame sender’s bodies, but it’s not about being saccharine or coddling: I don’t mince my words when someone sends me a thoughtless, lazy shot (although I do still try to be somewhat encouraging and constructive).

The fact that I don’t critique actual dicks is difficult to fully communicate to men: I still get dozens of emails asking me for private dick reviews, and requests to describe the “perfect penis." That’s pointless to me, and I’m never going to do it. Just imagine it: imagine, for example, if I decided that the perfect dick is shaped like a coke can, and it’s uncircumcised, and it has visible veins (but not too many), and it’s rock hard and dead straight. Where does that leave people with thin dicks? Veiny dicks? Dicks that veer to one side? Are they supposed to feel shitty and miserable about a body part they can’t change because of the idiosyncratic ideals of some woman from New Zealand they were never going to fuck anyway? It’s nonsense. I find the idea of a “perfect dick” reductive and insidious, and I often have to underline the fact that I’m not here to critique dicks, I’m here to critique dick pics.

The obvious question, then, is what makes a good dick pic? I’m often asked this, and I consistently repeat a few key tips: don’t send a log. Realize the power of your hands to transform a dick pic from ordinary to wettie-inducing. Pay attention to the background and setting of your picture, and understand how off-putting a visible pile of dirty laundry or extremely mundane collection of shower gels can be. Be aware that even a very small amount of thought and consideration for the desires of your receiver will set you apart from most dick pic senders, and take advantage of that by putting more than three second’s thought into the pose, composition and lighting of your picture. Having said that, though, it’s difficult to prescribe an ideal dick pic. Some of the most memorable pictures I’ve received I never saw coming. I wouldn’t have thought to recommend dusting your half-naked body with bone fragments, for example.

I “indefinitely deprioritize” (ahem) at least half of the dick pics I receive, maybe more than that. If that sounds discouraging, bear with me: every day I receive dozens more pictures than I could ever hope to review, and an alarming amount of them are still of terrible quality. I get hundreds of emails from men who clearly don’t read the blog and just want to flick a whip-it-out, zero-effort cock shot at anyone who’ll look at it. I’m not here for that. A good way for submitters to make sure that their picture will feature on the site is for them to send me their absolute best effort in the form of one single picture: I get plenty of “here’s my dick at 14 different angles, please critique!” type submissions, and they’re rarely a hit with me. People who are courteous and polite in their emails have a markedly better shot of receiving a critique, and I’ve mentioned before that I will prioritize dicks of color, and any other submissions which prevent the blog from becoming an endless sea of cis Caucasian junk.

All in all, Critique My Dick Pic is proving to be an extremely positive and humbling project. It’s fun and light, but it’s also confirmed to me just how fragile men are; how crumblingly insecure and self-conscious so many of them are about their bodies. That’s very human and understandable, and it’s a terrain with which most women are familiar, but men in particular are exhorted to grin and bear their body issues rather than talk about them. Perhaps that’s why they’ve responded so openly to my project; an anonymous outlet for them to share their deepest vulnerabilities (and to swing their dicks around). It’s very humbling to be put in a trusted position like that, and even though I have a pull-no-punches approach to reviewing, I try to be careful with people’s feelings. Fundamentally, I’m doing this project to help people—senders and receivers alike. I want to rid the world of boring, artless dick pics, and I want to get everybody on board with that.

Check out this extreme knife-throwing performance by Sweden's table tennis stunt group (yes, it exists) Tumba Ping Pong Show that will either put you on the edge of your seat or make your eyes squint because it really does look too good to be real. What's your verdict?

dreadhead
reply
I hope this is real.
Vancouver Island, Canada

The Cellar - Image of the Day 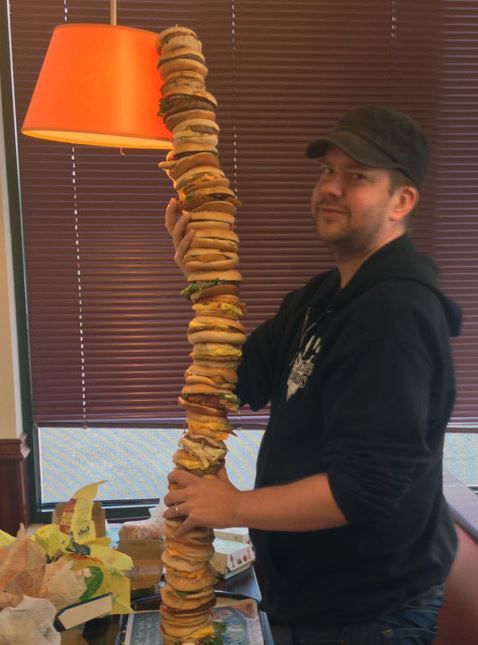 These days, including the breakfast offerings, McDonald's offers 43 different sandwiches. So this dude (his website is called "Dude Foods") decided to create one big sammich consisting of all 43 combined.

Now having to do something with 43 different McDonalds sandwiches: less so.

robynnc
"The way I see it though is that with all the leftovers I have I’ve got all my breakfasts, lunches and dinners covered for the next week or so!" and a trip to his cardiac provider... yuck.
Next Page of Stories